World Book Day was billed as a big, happy, booky celebration of reading.  I had my fest at five schools with 1,200 children between them.  The jury's still out on who had the most fun - them or me! Take a minute or two to enjoy some of the rhymes and artwork featured here.

Each child I met had a story to tell and each told it in different ways.  Some made masks and acted out their story.  Some created rhyming couplets.  Some wrote long, dramatic tales of adventure, fantasy and heroism.  They were funny, tragic, inspiring and fantastical.  The children's imaginations were mind-blowing, right down to the pretend clowns throwing custard pies at their audience.  We talked a lot about stories, too: how we create them, how they don't come out perfectly first-time around, and how picture books aren't just for little ones.

The children who took part in my Mad Rhymes workshops were so wildly creative that I'm pleased I thought of the story first, because some of the ideas and rhyming couplets were stunning.  Here is a selection of them, including my favourite one which was this one by Amelie Shipton from Year 2 at St Martin's Infants in Epsom, Surrey: 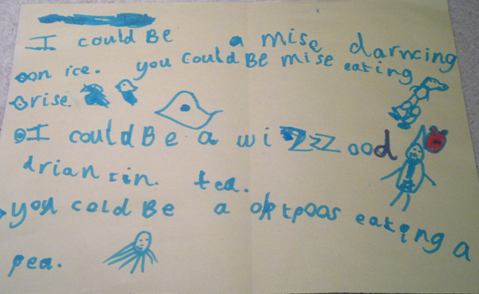 I could be a wizard drinking tea,
You could be an octopus eating a pea.
by Tom and Aimee, aged 6

These are from Broadfield East Infants School in Crawley, West Sussex:
I could be magic like an old wizard,
You could be a snowy owl flying through a blizzard.
By Andrea and Iman, aged 7

I could be a pop star singing as loud as I can,

You could be a cook sizzling sausages in a pan.
By Nancy and Aaraiz, aged 7

I could be a werewolf howling through the night,
You could be a lion roaring with a fright.
By Gracie-Leigh and Joshua, aged 7

I had a ball and want to thank the children and the schools for sharing their World Book Day with me.  Thanks, too, to the teachers and librarians who were coerced with barely any warning into dressing as clowns and making complete fools of themselves in front of their classes.
Posted by Karen Owen at 07:30 No comments:

Labels: I Could Be You Could Be, Karen Owen, visit, World Book Day

Welcome to my link in the Writing Process Blog Tour.  I was tagged by my writing friend and critique partner Julie Fulton.  Julie and I met properly at a picture book writers' retreat in Worcestershire - I've written "properly" because we later discovered that not only had we met before at the SCBWI's mass book launch, we'd also been photographed standing next to each other.


So, back to the Blog Tour, which focuses on the writing process.

What am I working on?

I've got a number of different projects on the go.  I've just finished editing my first Early Reader story, a chapter book for emerging readers.  A couple of trusted writer friends gave the final draft a read-through and now it's flown the nest and is sitting on a publisher's desk.  Fingers crossed.  My next project is a series aimed at 7 to 9-year-olds.  I've finished the first draft but I'm unhappy with the lack of plot focus (far too many little plots but it needs one big plot to drive the narrative) so I had a brainstorming session with a well-respected editor on Friday.  Now I'm brimming with ideas and can't wait to knock a second draft into shape.

Finally, I'm brushing up a couple of picture book texts.  I have three lovely writer friends whose opinion I trust and they're great fun to work with.  Julie and I met Tracy and Liz on the Worcestershire retreat but we live in different parts of the country so we're planning to get together for a working lunch at a halfway point.  This week it's going to be Northampton.  Tea, gluten-free cakes and writing.  What's not to like?

How does my work differ from others of its genre?

I think this is almost an impossible question to answer!  When I write, I write what I want and it comes from my heart, rather than focusing purely on commercial considerations and what drives the market.  Many of the sparks for my plot ideas and themes are drawn from what I've experienced so the way I shape those experiences is going to be unique.  However, like most authors I'm influenced by other writers too.  I grew up on a book diet which included Enid Blyton.  Even now, there's a part of me that dreams of discovering the Faraway Tree in her Enchanted Wood series, along with Moon Face and Mr Whatzisname, and being able to climb through the clouds at the top of the tree into an unknown land.

Why do I write what I do?

Because I have to.  I become incredibly grumpy if I don't.  If I don't write, the creative side of my brain goes into overdrive and I have the weirdest dreams to the point of being unable to sleep.

How does my writing process work?


Randomly!  My teenage son plays cricket and my 11-year-old daughter is a diver so if they're not at school then they're usually training.  I spend a lot of my time driving them to sports venues and hanging around for four hours at a time so I often use it as an opportunity to write.  The white noise of swimming pools is strangely calming so I sit by the pool, I sit in cafes.  I also write on trains, in the car (not while I'm driving!), on the beach, up a mountain.  Sometimes it's with pen and paper, sometimes it's in my head, mulling over plot ideas.  Sometimes I'll pretend I'm a character that I'm developing so I can get an insight into what it's like to be him or her.  It's all part of my writing process.

I'm handing the Blog Tour baton on to Christina Banach, an ex-Headteacher turned full-time writer.  She is married and lives in Scotland with her husband and two daft rescue dogs who take turns to sit under her desk while she's writing.  Next month sees publication of her debut novel MINTY, a contemporary ghost story described by her publishers as a cross between The Lovely Bones and Ghost.  She'll be blogging on Monday, March 31st: www.christinabanach.com

Labels: Blog Tour, I Could Be You Could Be, Karen Owen
Newer Posts Older Posts Home
Subscribe to: Posts (Atom)