Save Our Libraries - Before It's Too Late

There comes a time in life when you have to stand up and be counted for something you truly believe in. I've spent a lifetime "hiding" behind my words and those of others, hoping they'll be enough. I dislike confrontation and prefer to formulate my views without being bullied by others with louder voices. I've reached the age of 45 without going on any kind of political march or, indeed, doing anything political bar voting at local and general elections.

On Tuesday, February 9th, that will change because I'll be joining the Save Our Libraries rally to Westminster. I can no longer stand on the sidelines and watch as more and more libraries are threatened by closure and dramatically reduced services because of savage financial cutbacks.

My protest is about the continual erosion of equality.  Knowledge is power, as Sir Francis Bacon said in 1597. To have a fair society, you need to start early, not only with academic education but also with opportunities to be creative and fuel the imagination. Stories do that. That's why parents and carers with babies and toddlers go to the library to listen to storytelling and rhyme-time hosted by enthusiastic librarians.

To have a fair society, all children need access to the  resources available.  Libraries aren't just about books; they're also a vital source of e-books, audio books, academic journals, hard-to-get-hold-of non-fiction texts.  They're about vital public services: computers with Wi-Fi (and, yes, there are plenty of households without either at home), job clubs, a safe space for young people in areas where there are no longer many youth services left.  A space for the community.

Books Aloud, run by Jenny Hawke at Petts Wood library in Kent, is a perfect example. I joined them last week. There were more than 20 children there - after school on a blustery winter's afternoon - all of them excited to be in a creative, imaginative story-land. 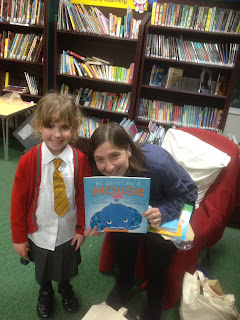 My family couldn't afford the copious number of books I consumed so I went to the little library in my rural Kent village.  Every week. Often two or three times a week. I owe my imagination, my expression, my understanding of life to books. I travelled the world to places I'd never be able to visit otherwise. I felt comforted when I needed distraction from the realities of teenage life. I felt safe when I needed somewhere to go.  All thanks to a small building jam-packed with books, perched between the village's few shops.

So that's why I'm breaking my habit of a lifetime. I want my voice to be heard because I need a future which has libraries in it.
Posted by Karen Owen at 02:55